There are now only a handful of Amusement Attractions in the Niagara area. Of course, the most historic of them all is Lakeside Park in Port Dalhousie, where you can still take a ride on the restored original Lakeside Park Carousel for only a nickel.

In Niagara Falls, Marineland is still going, and has expanded its ride selection over the past few years. There is also the "new" Niagara Skywheel, which is a modern version of the Giant Wheel formerly at Maple Leaf Village. The Skywheel is located on Clifton Hill, and has climate controlled gondolas, for year round operation. There are a couple other rides as part of some of the museums on Clifton Hill as well. Still in the plans for a location just off Clifton Hill is a new amusement park, which is supposed to have 2 roller coasters, and numerous flat rides. 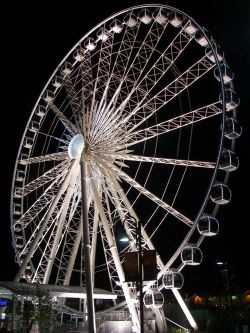 As for waterparks, Niagara Falls now has 3 of them, all indoor. The first was at the Americana Resort, which is the smallest of them all. Great Wolf Lodge, a large family oriented lodge has a large waterpark, with slides that go in and out of the building. The newest is built on the top of the parking garage at Casino Niagara, and is the largest. It is the only one that allows the general public to visit the park on a day pass.